What a year. Higher ed came into 2020 facing its share of financial challenges: a negative outlook for the entire sector, widespread operating deficits, stark enrollment challenges. Enter Covid-19, along with its attendant declines in enrollment, net tuition, and auxiliary revenue — to say nothing of Covid-related expenses.

How bad is it? To answer that, my colleagues and I sought to go beyond surveys. We conducted an extensive review of publicly announced revenue and budget news from the top 400 universities in U.S. News & World Report, as well as its top 100 liberal-arts colleges, drawing from news released from March through December. We were able to obtain data from 107 of those institutions (21 percent). The results are dire. Our research suggests that we are experiencing the biggest financial losses our sector has ever faced. The institutions we tracked averaged an estimated 14-percent aggregate decline in revenues across fiscal years 2020 and 2021, and further losses loom as drops in enrollment, tuition freezes, and Covid-related expenses continue.

The 14-percent average revenue-decline estimate may even be overly optimistic: Many state legislatures have not yet adjusted higher-education budgets to account for the new reality. Among those that have, the early signs are not positive. The University of Nevada at Las Vegas has seen a 20-percent decline in state support. The University of Missouri at Kansas City has seen a 12-percent decline. The Colorado legislature went as far as to cut higher-ed funding by 58 percent (though federal money eased the blow and the governor is aiming to restore funding this year, but who knows how that will shake out).

What do these cuts and losses add up to? We estimate the impact as follows: $85 billion in lost revenues, $24 billion for Covid-related expenses, and $74 billion in anticipated future decreases in state funding. That adds up to a whopping $183 billion.

A few caveats: Our data are early estimates of financial impact with a focus on revenue losses and Covid expenses. The actual numbers will not be known until fiscal year 2021 concludes — typically the end of June. And these numbers will change over time as new publicly announced estimates emerge. (In cases where revenue losses are not broken out from the anticipated budget deficit, we assumed revenue loss as 78 percent of that total budget deficit based on the ratio reported by the Association of Public and Land-Grant Universities based on fall 2021 results.) Total hits to budget will be contingent on final revenue impacts and cost-reduction efforts.

At America’s more than 4,000 colleges, there is certainly diversity in strategy and student composition, but the sources of revenue are fairly consistent across institutions: tuition, government support, endowment returns, auxiliary operations, and philanthropy. Unfortunately, all five of these sources are under great pressure due to the pandemic.

Net tuition is on the decline due to lower enrollments and increased discounting, which is on the rise as colleges — especially small- and medium-sized private colleges — struggle to maintain enrollments. Decreases in the number of international students (who often pay full tuition) further exacerbate the net-tuition picture. State-government support is declining due to lower tax revenues and increased health-care costs.

Endowment returns thankfully are so far holding steady or increasing, but the underlying conditions of our economy suggest that continued growth in 2021 is far from certain. One of the areas hardest hit, especially for large institutions with significant numbers of students not on campus, was auxiliary revenue. This would include losses in housing, dining, other spending, and especially athletics.

One small silver lining: While early indications suggested fund raisers would struggle to meet their goals, recent market performance may have buoyed those concerns. Still, while endowments can contribute to a university’s operations, they are not typically a source to fill short-term financial losses.

Tuition-pricing strategies vary widely, but the majority of institutions seem to be holding tuition steady — which is in essence a decrease given inflation and the traditional annual increases in tuition of 3 to 5 percent over the past decade. Shown below are the data from our research on announced changes to tuition. Interestingly, 26 percent of the private institutions in our study have actually announced tuition decreases. Reasons cited for such decreases and freezes include concerns about losing students due to closed campuses and the possible lower perceived quality of remote instruction.

At Georgetown University, for example, David Green, the chief financial officer, described the rationale for a 10-percent reduction in tuition: “Despite potential significant financial headwinds, we felt that we needed to do what we could to help our students and their families. At the same time, we are working hard on finding cost saving opportunities as you cannot just keep increasing spend each year, it is unsustainable.” 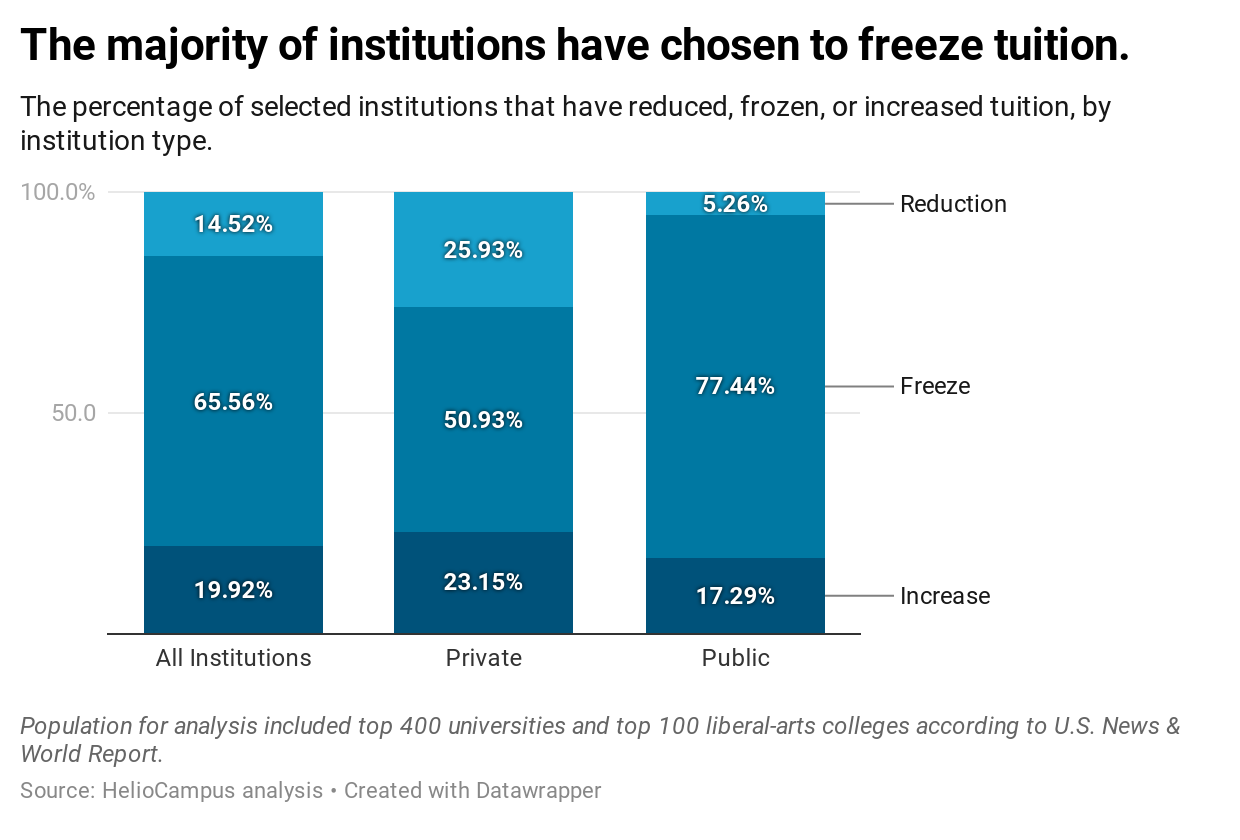 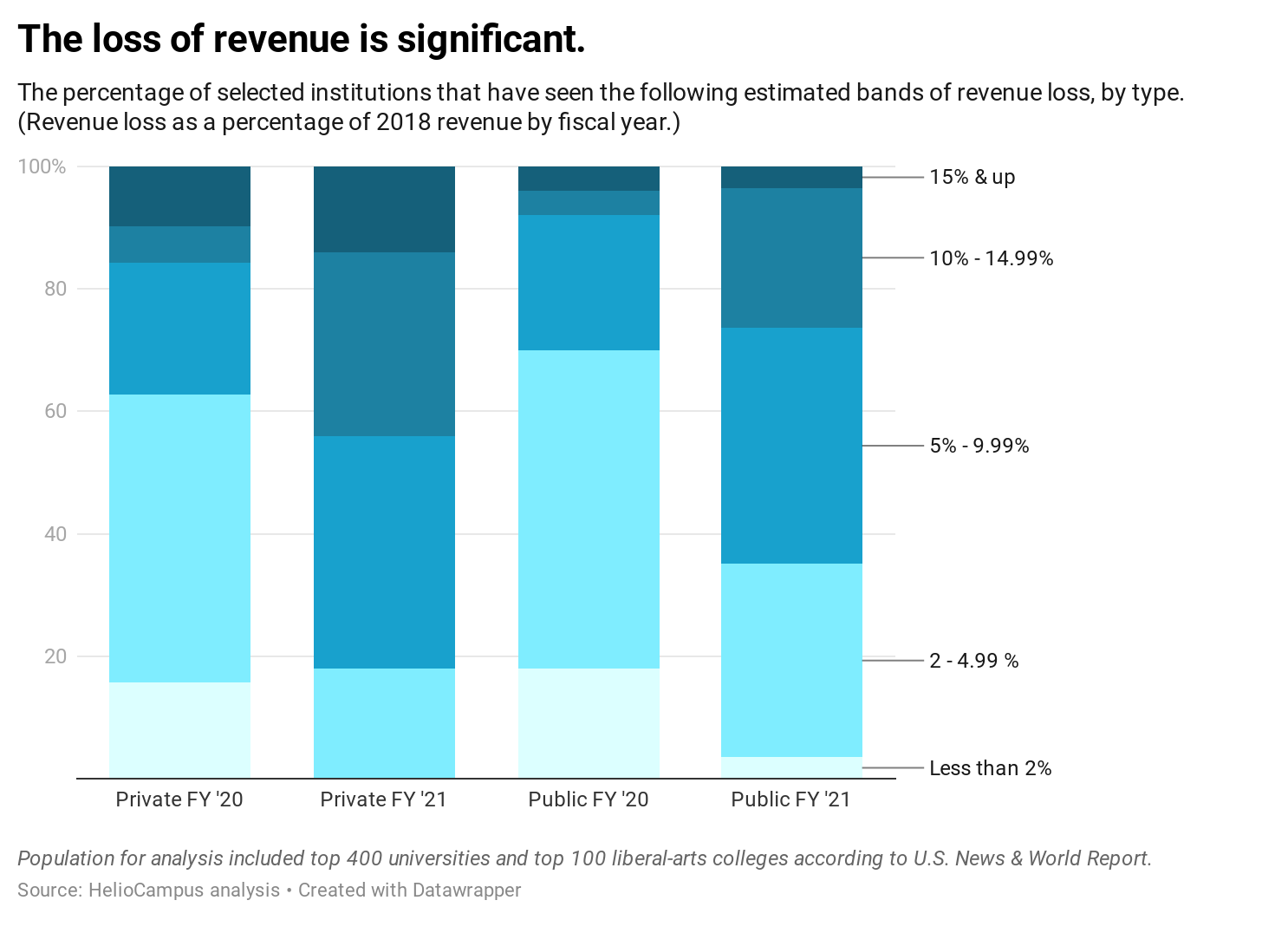 And yet, there is still hope, especially when it comes to federal assistance. Colleges have learned not to count on these funds to fully rectify strained budgets, but every little bit of federal funding helps. The Cares Act passed in March provided $14 billion to institutions, with about half going to student aid. In December Congress passed more aid for higher ed — an additional $23 billion, again with about 50 percent designed for student grants — and an additional $35 billion for higher education is included in the early drafts of the new $1.9 trillion stimulus package, half of which would go to colleges (a GOP counterproposal leaves higher ed out).

In sum, we are looking at between $19 billion and $37 billion in support for higher education institutions with a matching amount for students, depending on the passage of the Biden proposal. If colleges incur the estimated $183 billion loss suggested earlier, this leaves a shortfall of $146 billion to $164 billion. No wonder the higher-education lobby is asking for more. (The latest APLU request is for an additional $97 billion.) It’s crucial that we view any additional aid as an investment and not a bailout, and strategically plan for the funds as well as for the accountability that will come with them.

With a potential ongoing gap of around $150 billion, we have a lot of work to do, and among the highest priorities for all colleges this year has been cost containment. “Higher ed has been feeling financial pressure for many years, but is only beginning to tinker with the underlying business model,” says Kasia Lundy, partner in the higher education practice at EY-Parthenon. “Covid-19 has accelerated the financial impact to a point where institutions are forced to address budget shortfalls and operating-model changes more holistically and much faster than ever before.”

Academic leaders have shown an unprecedented nimbleness in adjusting operations to the pandemic, from the dramatic shift to remote learning to new campus protocols for Covid safety. Scenario planning has become commonplace cabinet nomenclature as universities model varying levels of financial strain.

And yet, while this is all promising, boards and campus leaders need to push harder for long-term changes to our operating model. Quick solutions such as increasing debt may help with cash management but will not bring about long-term fiscal sustainability.

The most common cost control strategies are short term: Our research reveals that 75 percent of institutions have instituted hiring freezes, a dramatic shift to the annual growth in personnel that has been routine. Half of the campuses we studied have implemented furloughs. No-travel policies, cuts to benefits, and elimination of on-campus events and purchases have also helped curtail spending. Fifty-two percent of universities we researched have put in place leadership and staff pay cuts, and over 38 percent have announced delays in capital-spending projects (it is likely that many more have done this but not disclosed it publicly).

My home institution, the University of North Carolina at Chapel Hill, is implementing many of these strategies with a goal of freeing up 3 percent of personnel costs and 15 percent of operating funds over fiscal years 2020-21 and 2021-22. They have identified $100 million in structural deficits to fill, in addition to a $200 million gap directly related to Covid. “It is the responsible thing to do for the future of the university,” explained Chancellor Kevin Guskiewicz at a recent faculty and staff meeting. The budget-reduction efforts will be developed collaboratively; will work to avoid blanket, across-the-board cuts; and will examine all options, including reducing the number of senior administrators. I applaud such a clear-eyed approach.

And yet few institutions are tackling these difficult, long-term cost-containment challenges. The higher-ed work force has shrunk between 337,000 and 500,000 since the pandemic began, though the majority of these appear to be temporary furlough arrangements. According to our research, only 38 percent of institutions have announced formal layoffs. Other likely strategies include delays in filling open positions, early retirements, and voluntary separations. All of this is painful, but it may be necessary in certain cases.

Higher ed is hurting. Our entire operating model is under siege, the revenue losses are unprecedented, and campus leaders are beginning to respond to the historic challenges. They are realizing that cost cutting alone is not the answer, and that this is a time to clarify their institution’s unique value to their students and communities.

Morgan State University is adopting a “cut and grow strategy.” As Sidney Evans, the chief financial officer, put it to me, they are not leaving any stones unturned:

“We have been very aggressively tackling a 15-percent operating-budget deficit, or about $40 million on the $270 million budget. We are making great progress with our full court press on administrative and academic spending in order to free up cash to invest in our journey to become the first HBCU R1 University. Even with our game-changing recent philanthropy, we plan to continue our cost-containment efforts.”

We will only be successful if we work together. This includes institutions and government, boards and cabinets, and faculty and staff members. Only such collaboration will help us do the near-impossible: transform higher education for the better amid a pandemic.

Paul N. Friga is a clinical associate professor of strategy at the Kenan-Flagler Business School at the University of North Carolina at Chapel Hill. He also co-founded ABC Insights, a consortium of universities working to become more efficient and effective, which was acquired by HelioCampus this year.