Sam Houston State University recently delivered an important message to its faculty: The campus cannot meet federal guidelines for their safety during the pandemic.

Then, in the same memo, professors were told they must report to work in person.

“Social distancing is not possible on a college campus at all times,” Richard Eglsaer, provost at the Texas institution, wrote in the July 22 memo, which was obtained by The Chronicle. He added, “It will not be possible to meet CDC guidelines to the letter in all situations.”

Nevertheless, the university is reopening under a “hybrid” model that allows students to share a classroom with their professors at least once a week.

Faculty who wish to work remotely face an uphill battle. They must be “physically unable to teach,” Eglsaer wrote, and simply having a high-risk medical condition “does not qualify.”

The provost’s memo told faculty that students are clamoring for an in-person experience, and that keeping students happy is the best way to avoid layoffs.

That tug-of-war, between financial concerns and public health, is the tense backdrop of the looming fall semester across American higher education. And some faculty members and students are pushing back — organizing protests and petitions against what they describe as reckless and dangerous reopening plans.

The annual lead-up to fall, normally brimming with optimism and possibility, is now filled with dire warnings — warnings that are often ignored.

At Sam Houston State, an open rebellion has not yet occurred, although discontent is clearly present. The provost’s memo was emailed to The Chronicle by an anonymous tipster who said they were on the faculty.

A university spokeswoman told The Chronicle that the purpose of the memo was to “acknowledge that no entity that operates within a public environment, such as a university, can promise ‘complete’ safety. To do so is misleading.”

Sam Houston State said it remains confident that “much of the public risk associated with campus life and operations can be mitigated.”

Similar scenes are playing out elsewhere. Although many colleges are being cautious and keeping their operations remote, other institutions are moving forward with a full reopening or a hybrid model that includes some in-person courses.

Last week the chancellor of the University of North Carolina at Pembroke admitted at a faculty town hall that he feared some students would take a gap year if the university reopened fully online.

The financial benefits of inviting students back to campus can be big — higher tuition revenues, along with cafeteria sales and dorm payments.

And the health risks? They’re even bigger.

Protesters gathered last Tuesday for a “die-in” and drive-by protest outside a University of Oklahoma Board of Regents meeting. Among the protesters’ demands: an online teaching option for all instructors, and remote work options for staff. 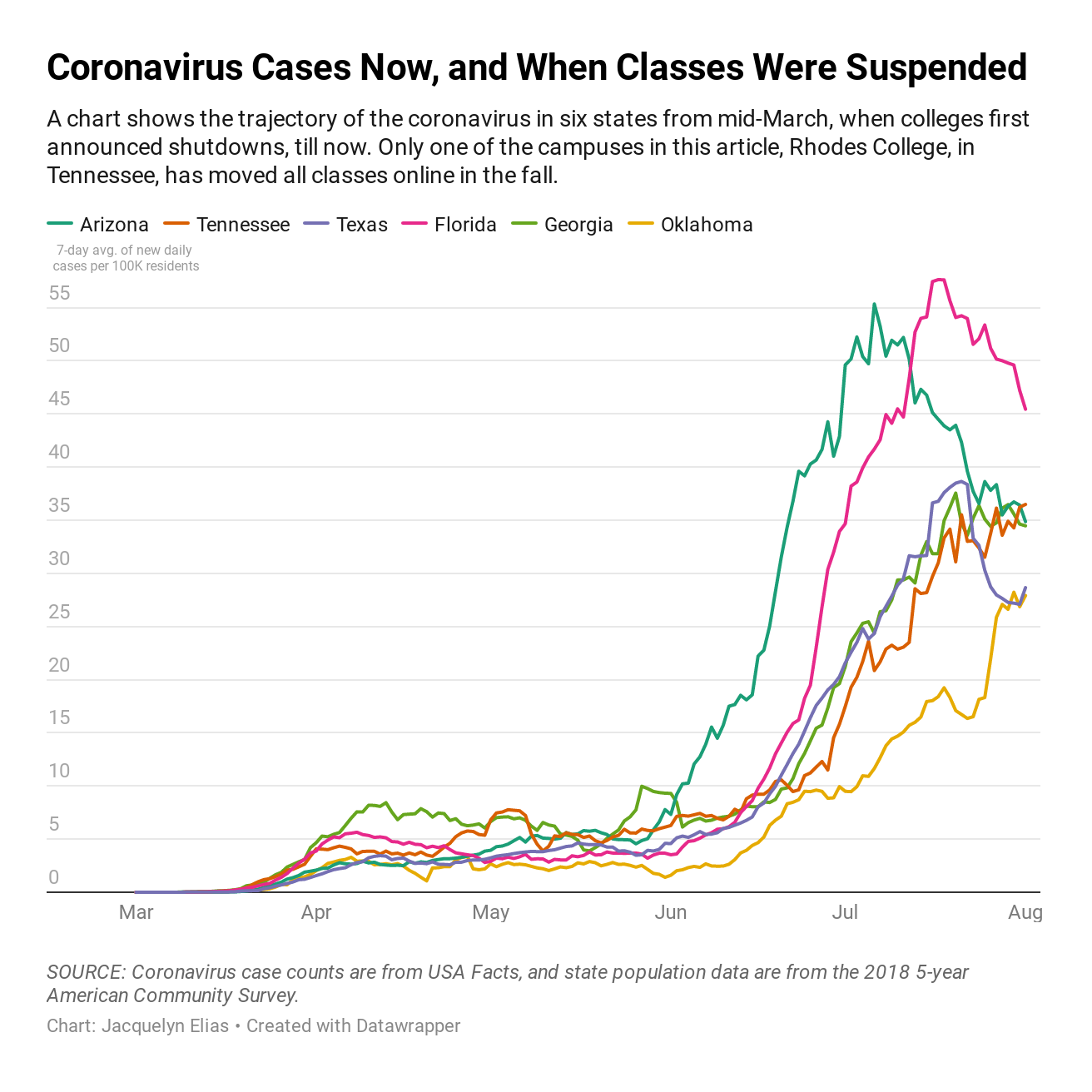 Protesters have also appeared at the University of Texas at Austin.

“The UT administration apparently views death on campus as inevitable rather than preventable, which is disappointing,” said Katie Kaufman Rogers, a graduate student in sociology. “But it’s also scary, because I work there.”

Rogers, who will work as a teaching assistant this fall, said she doesn’t know yet if she will be required to come to campus when classes resume on August 26. That will depend on which professor she is assigned to, and if that professor asks her to show up in person. Rogers plans to tell the professor that she is uncomfortable being on campus.

“If they insist, then I honestly don’t know,” Rogers said.

In response to written questions from The Chronicle, the University of Texas said it would be “inaccurate” to suggest that employees are being forced to work in person against their wishes. J.B. Bird, a campus spokesman, cited the university’s reopening plan, which states that employees with certain medical conditions can request to work remotely, and employees who live with someone who is at high risk of Covid complications can also request “flexible teaching arrangements.”

But the reopening plan is vague about how it will treat employees who are simply afraid of coming to work.

“If an employee expresses personal concerns about a job that requires an on-campus presence, the university will use its existing flexible work processes to determine whether an alternate work arrangement is feasible,” the plan states.

A recent New York Times analysis found that the University of Texas had the highest reported number of coronavirus cases in the nation among colleges: 449, when combining both students and employees. The analysis included data only from colleges that tracked and disclosed their cases. The Times noted that of the nearly 1,000 colleges it contacted, hundreds did not respond. And the article acknowledged that some of the cases could involve people who haven’t been on campus recently.

Still, the high number of cases demonstrates the severe spread of coronavirus in Austin and the state of Texas overall.

In July, the university suffered its first employee death from Covid — a custodian.

“This is a heartbreaking moment for Longhorn Nation,” Jay Hartzell, interim president, said in a statement following the worker’s death. “We have weathered the pandemic for months, but now, it has become personal in a whole new way.”

When colleges closed their campuses in the spring, the pandemic was just getting started. Now, with some 4.6 million cases in the United States and more than 155,000 deaths, expressions of grief from college presidents could become far more common.

The University of Texas told the The Chronicle that the “multi-layered safety strategy” of its hybrid reopening — with an emphasis on mask wearing, social distancing, contact tracing, and reduced density in classrooms — will make an enormous difference. And some students would choose to return to Austin regardless of whether in-person classes were held, the university said.

“We feel the campus will create a safer environment than students might otherwise encounter, and that we can help reduce hospitalizations in Austin, a trend that has already begun,” Bird wrote.

Reopening during a pandemic is a logistical and ethical minefield. As the situation in many states continues to worsen, an increasing number of colleges have abandoned their once-ambitious reopening plans.

Rhodes College, in Memphis, had a reopening plan that was embraced by faculty, staff, and students. Then the Covid situation in Tennessee worsened, and by mid-July, President Marjorie Hass informed the campus via email that the fall semester would have to retreat to an online format.

The decision was reached after consultation with medical experts, Hass wrote, and those experts “advised that no plan could make up for the fact that conditions in Memphis are increasingly severe. They told us that based on the current facts and trends, we should expect that campus outbreaks of Covid-19 would quickly outpace our ability to provide an appropriately safe environment for our students, faculty, and staff.”

As Hass wrapped up her message, she wrote, “We continue to be guided by values that keep your health and safety foremost in mind.”

Colleges that are reopening in person argue that they, too, are prioritizing health and safety — for example, by spending heavily to fortify their on-campus operations. The University of Central Florida has spent about $5 million for various Covid-related precautions. Among them: 1,200 touch-free hand-sanitizer stations (with 2,000 cases of sanitizer refills) and 600 disinfecting-wipe dispensers (with 1,200 cases of wipe refills) for a total of $491,000. The university, which will operate on a hybrid model this fall, also spent at least $30,000 to buy more than 500 plexiglass panels — collectively a quarter-mile long — to be installed in various high-traffic areas.

The hotly debated question is whether those safety upgrades truly make a difference. Last week the largest faculty union in Florida called for a full shift to remote learning, citing the worsening conditions in the state, and the inadequacy of university reopening plans, which it criticized for having “too many common shortcomings” related to public health.

In the Covid-19 era, some businesses, such as gyms, or indoor restaurants, are inherently dangerous. This is especially true when cases are on the rise.

Should colleges be put in that category?

University leaders are certainly willing to take more chances than their counterparts in public schools. In college towns such as Athens, Ga., the school system isn’t ready to open its doors. Instruction will begin online, for at least the first couple of weeks.

But the University of Georgia is sticking to its August 20 reopening date.

Athens, with a population of about 127,000, is ill-equipped to face an additional surge of Covid cases from a campus outbreak. Two critical-care hospitals serve a region of more than a dozen counties, with a total of 70 intensive-care beds between them. As Georgia struggles to contain the virus, fewer than 10 beds are now available on a typical day, according to Kelly Girtz, mayor of Athens-Clarke County.

In anticipation of the hordes of undergrads who will soon arrive, the city of Athens approved an earlier 10 p.m. “last call” for bars, to reduce the risks associated with students socializing.

Girtz said distance learning should be used “as frequently as possible” to reduce Covid transmission. Some courses, such as medical training, make more sense in person, the mayor acknowledged.

“But I also would say that there are a great number of opportunities — humanities classes, literature classes, statistics classes, I could go on and on — where you could teach the class or you could take the class digitally in a way that would also be academically solid,” said Girtz, a former high-school teacher and school-system administrator.

The University of Georgia isn’t going as far as the mayor would like. It will use a hybrid teaching model, with classes partially online.

In another college town, Flagstaff, Ariz., the vice mayor, Adam Shimoni, has publicly called Northern Arizona University’s reopening plan “absolutely absurd,” given that the state is a Covid hotspot.

The university has also faced criticism from its own faculty and medical experts. Its Center for Health Equity Research published a scientific update in July that began with this sentence: “Arizona is in a very different and much more dangerous place today.”

The center recommended remote learning for the fall, citing Arizona’s “patchwork” contact-tracing efforts, troubling backlogs in Covid testing, and the risks of a college campus environment , which it described as “a dense network of highly connected, clustered settings with intense social contact.”

The university is still planning on a hybrid semester for the fall, although in recent days it backtracked a bit, announcing that the first few weeks of instruction will happen online, with a shift to in-person learning planned for the last day of August.

Tad Theimer, a biology professor who has criticized the reopening plan, said the collective pressure is beginning to have an impact. He hopes the university’s plan will continue to improve.

But Theimer also complains that faculty don’t have the option of deciding for themselves whether to teach in a classroom. The university responded by telling The Chronicle that “high-risk faculty and staff have various work options available to them.”

Theimer also sympathizes with administrators, who he predicts will have to cut more jobs if classes are solely online.

“I decided that if we’re going to reopen, then I will go face-to-face with my students, in order to support those folks who need those livelihoods,” Theimer said. “But I’m also going to be honest with my students … I think we’re taking a big risk here.”

It is a risk that is unevenly spread. When discussing the virus, the 62-year-old professor began to reflect. He mused that he has enjoyed a fulfilling life — no matter what happens in the fall.

“If this takes me out, it’s going to take me out,” Theimer said.

Michael Vasquez is a senior investigative reporter for The Chronicle. Before joining The Chronicle, he led a team of reporters as education editor for Politico, where he spearheaded the team’s 2016 Campaign coverage of education issues. Mr. Vasquez began his reporting career at The Miami Herald, where he worked for 14 years, covering both politics and education.